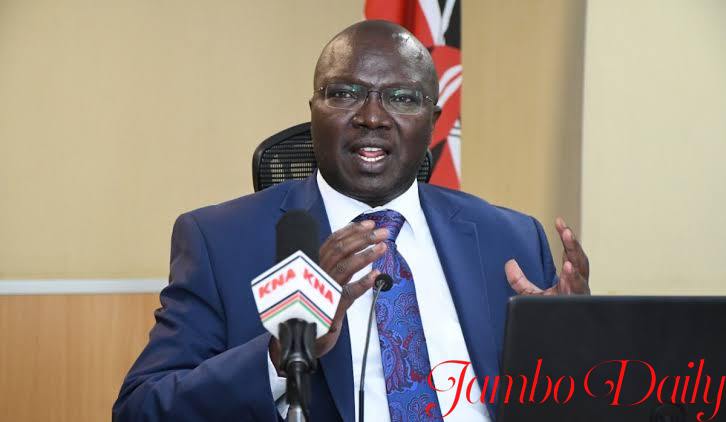 Simon Chelugui is a well known Kenyan politician and an activist. Currently, he is serving as the Cabinet Secretary for Labor and Social Services. He was appointed to serve in that position by H.E Uhuru Kenyatta in January 2020.

Previously Chelugui was serving as the Cabinet Secretary for Water and Sanitation which is now headed by Sicily Kariuki. In addition, he has also served as the CDF director and Board chairman.

After he stepped down from the race, he decided to join the senatorial race. However, despite giving up the gubernatorial position he was defeated by Gideon Moi, a co- principal of the One Kenya Alliance (OKA).

Chelugui began his career as an activist, he was then hired as the betting and licensing board director. In this capacity he was able to fully establish his name in the political field.

Moreover, Chelugui has also served as the Constituent Development Fund (CDF) board director as well as the board chairman. As the director, he came up with a perfect strategy, Economic Stimulus Package ( ESP).

The ESP strategy really helped in making sure that over 22 billion Kenyan Shillings was allocated to development projects. In 2017, Chelugui decided to vie for an elective position in Baringo County.

He went ahead and confirmed his interest in the office of governor representing. However, he later reconsidered his decision and decided to run for a lower position. Chelugui, joined the senatorial race where he faced Gideon Moi, who was running for his second term.

During the August 2017 general election, Chelugui was defeated by Gideon Moi. Despite loosing the election Chelugui was not left out of the government as he was nominated as a cabinet secretary.

Chelugui was first nominated to serve as Cabinet Secretary for Water and Sanitation by H.E Uhuru Kenyatta to serve under his administration in 2017. During his tenure the ministry of water was facing several challenges including corruption.

In 2019, Chelugui was questioned by DCI regarding the Itare dam which had corruption challenges. Chelugui spearhead the construction of Karemeno dam which is going to help many people and especially in Nairobi.

Chelugui also appointed a taskforce which was going to help the ministry to investigate, inquire general safety of dams country wide.

He left the Water docket to Sicily Kariuki who is currently heading the ministry.

Chelugui was born in Kenya , however, due to his secretive nature he has not revealed his actual date of birth. The information regarding his date of birth and place of birth will be updated as soon as it’s available.

Much is not known about his parents or his family background. Moreover, he has managed to Keep his love life very private and nothing is known about his wife or children. This information will be updated as soon as it’s available.

Chelugui is well learned person with bachelor’s degree in Commerce from the University of Nairobi. In addition, he also has an MBA (management ) degree. Chelugui also holds a MSC. in Soil and Water engineering degree.

Being a Cabinet Secretary Chelugui earns a lucrative monthly salary including allowances which sum up to approximately 1 million Kenyan Shillings. However, Chelugui has not yet disclosed his actual net worth. Use