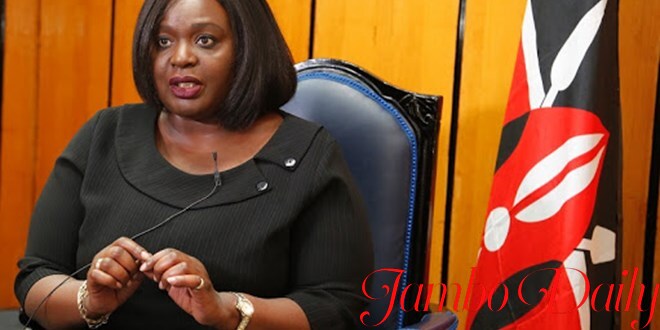 Raychelle Awuor Omamo is a Kenyan attorney and an advocate of the High Court of Kenya, currently serving as the Cabinet Secretary for Foreign Affairs. Omamo was appointed as the CS for Foreign Affairs on 14th January 2020 by H.E Uhuru Kenyatta.

She took the foreign affairs docket from her predecessor Monica Juma who is currently heading the Ministry of Petroleum and Energy. Previously, she was serving as a cabinet secretary for defense which is currently being headed by Hon. Eugene Wamalwa.

Omamo served in the ministry of defense for seven years from 2013 to 2020. In addition, in 2015 she served as an acting cabinet secretary of labor and social protection.

Moreover, Omamo has served as Kenyan Ambassador to France with accreditation to Spain, Portugal, the Holy See, and Serbia serving as a Permanent Representative to UNESCO between 2003 to 2009. As a professional lawyer, she was appointed chairperson of the Law Society of Kenya in 2001 serving until 2003. Being appointed in this capacity she was the first woman in the history of Kenya to Chair the law society.

She is the daughter of the late William Odongo Omamo, a former member of parliament and Minister of Agriculture, Environment, and Natural Resources. Omamo’s father had two wives and she has 16 siblings.

Omamo is a secretive person when it comes to her love life and much is not known about her love life. In addition, her niece Fiona Achola is married to President’s son, Jomo.

Much is not known about her Primary and O-level education. As for higher education, she attended the University of Kent at Canterbury in the United Kingdom, where she studied law.

She has not yet revealed her actual net worth, however, the information concerning her net worth will be updated as soon as it’s in the public domain.

As a professional lawyer, she started serving as a council member of the Law Society of Kenya in 1996 and served in that capacity until 2000. In 2001, she was appointed as the chairperson of the Law Society, becoming the first female to chair the society. Furthermore, in 2002 she was a recipient of the ICJ (K) Jurist of the Year award. Omamo served as the chairperson for only two years from 2001 and 2003.

Prior to her current position, Omamo has worked in numerous Kenya Government taskforces and Commissions involving enhancing of rule of law. Some of these taskforces include the task force on Landlord and Tenant Law, Task Force on the Establishment of the Truth and Reconciliation Commission.

For 27 years, Omamo has been serving as a Senior Counsel and an Advocate for High Court. Up to date, she is serving as the Vice-President of the East African Law Society.

After President Uhuru Kenyatta won the 2013 general, election, he appointed Omamo to serve as the Cabinet Secretary for Defence. In that capacity, she became the first woman in the history of Kenya to head the Ministry of Defense.

Omamo served in the ministry for 7 years from 2013 to 2020. Apart from being the CS for Defence, she was also the Chairperson for Defence Council. In 2015, she was appointed as an acting Cabinet Secretary of Labour and Social Protection.

On 14th January 2020, H.E Uhuru Kenyatta reshuffled his cabinet, transferring Omamo into the ministry of Foreign Affairs, which was being headed by Monicah Juma. The Ministry of Defense was then handed over to Eugene Wamalwa.