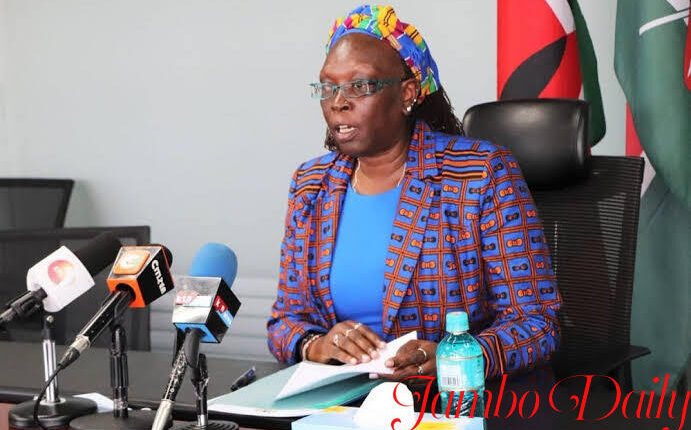 Betty Chemutai Maina is a Kenyan politician currently serving as the Cabinet Secretary for Industrialization, Trade and Development. She was appointed to head the Industrialization docket in January 2020, by H.E Uhuru Kenyatta.

She took over from Peter Munya who was moved to Ministry of Agriculture after Mwangi Kiunjuri was dismissed from office. Betty is expected to serve in that capacity until Uhuru’s term expires.

Previously, Betty was serving as the Principal  Secretary in the ministry of environment and forestry. In addition, she has also served as the Chief Executive of Kenya’s Association of Manufacturers.

As the Cabinet Secretary for Industrialization, her main role is to promote private and government sectors.

Despite being of the powerful women in Kenya, she is very secretive person and much is not known about his family background. Moreover, she has not yet disclosed any information about her husband or children. This information will be updated as soon as it’s available.

Being a cabinet secretary she earns a good salary of approximately 1 million Kenyan Shillings plus allowances. However, she has not yet disclosed any information concerning her investments or net worth.

Betty began her career in the early 1990s working as the Assistant Project Officer at the Shelter Afrique. She served in that capacity between 1990 to 1991.

After that, she was hires by United Nations Center of Human Rights as the Research Assistant. She held the position of research assistant from 1991-1993.

In 1994, she became the team leader in Programme Initiation for the Migori Integrated Urban Development Programme, serving until 1996. During this time she was also serving as Gender Advisor in Arid and Semi- Arid areas.

As time went by Betty kept climbing success ladder and in 1996, she got a job in Local government reform program in Kenya. With the local government, Betty was working as a consultant.

In this capacity, she founded a team which lead in the investigation and suggestions alternating to resources for local authorities in Kenya. She worked in that position for only one year from 1996-1997.

In 1997, she earned herself a senior position at the Institute of Economic Affairs (IEA)in Kenya, serving as the Chief Executive. IEA was an independent body which was promoting public awareness on matters concerning policies.

Between 2004 and 2015, she elevated to Chief Executive of the Kenya Association of Manufacturers a position she held for 11 years. During her 11 years stay she managed to double the membership of the Association.

Moreover she spearhead the formation of seven satellite offices that aimed in improving the services offered at the national office. In addition, during her tenure she was able to raise the association revenue from 24 million to 400 million annually which is highly recommendable.

Before being appointed as the Cabinet Secretary, she was serving as the Principal Secretary (PS) in the ministry of environment and forestry.

Serving as the Cabinet Secretary

Betty was appointed as the Cabinet Secretary for the first time in January 2020 to head the Industrialization, Trade and Enterprise development. Her 28 years experience as a leader in many organisations and clean record really  influenced her appointment.

She was nominated by President Uhuru Kenyatta to serve under his administration until his term lapses in 2022. She replaced Peter Munya who was moved to the Ministry of Agriculture after Mwangi Kiunjuri was sent home for poor management of the ministry.

In her current capacity, she is the one who oversees the promotion of both government and private sector when it comes to industry. Over the one year that she had been in office the Industrialization sector has been rebranded with a new face.