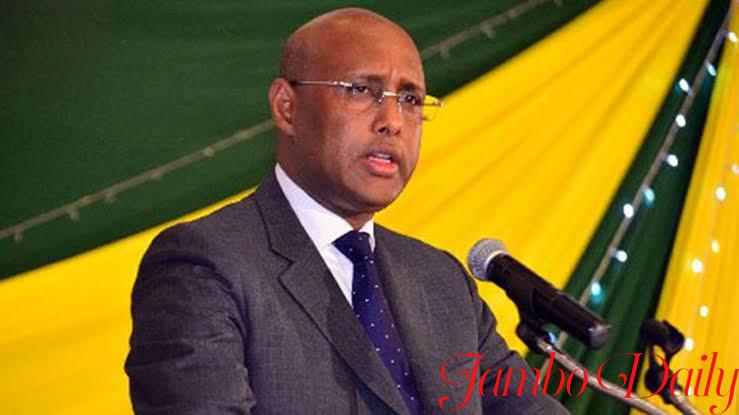 Adan Abdullah Mohamed is a well known Kenyan businessman and a banker. Currently he is serving as the Cabinet Secretary of East African Community and Regional developments.

Previously Adan was serving as the Managing Director of Barclays Bank in East and West Africa, at the moment Barclays Bank has rebranded to ABSA Bank. He has also served as the Cabinet Secretary for Industrialization and Enterprise development.

During his time as the Managing Director of Barclays ( now Absa), BBK was able to win the Banker Award in 2009. He was first nominated as a Cabinet Secretary in 2013 by HE Uhuru Kenyatta, to serve under his administration.

Adan moved to the ministry of East African Community and Regional Development in 2020 after H.E Uhuru Kenyatta reshuffled the cabinet. He left the industrialization and Trade docket to Betty Maina who is currently heading the ministry.

He was born in December 1963 and he is 58 years as of 2021. He was born in El Wak in Mandera County, his parents are of Somali ethnic comes from the garre clan. Adan is married to Nafisa and they have been blessed with 5 kids. 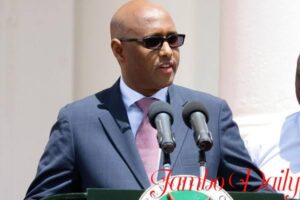 His parents are of Somali ethinic and are from garre clan, however, much is not known about his family background. He is married to Nafisa and they have been blessed with 5 kids.

He started schooling at Mandera Primary school and he was one of the two pupils  who made it to high school. After primary he joined Kangaru high school in Embu. He then joined the University of Nairobi where he graduated with a first class BCom degree. Adan proceeded to acquire his MBA at Harvard University of Business Studies.

Over the years his net worth has been increasing rapidly though he has not yet revealed his actual networth. Being an entrepreneur and Cabinet Secretary receiving a salary of approximately 1 million Kenyan Shillings. He is among the richest peopl in Kenya.

Adan began his career in the early 1990s, when he was hired by Pricewaterhouse Coopers. He was then sent to London to train as a chartered accountants.

However, despite training as a chartered accountants, Adan shifted his focus and concentrated more on consultant. As a consultant he was posted to Shell in Nigeria where he served for three years before deciding to continue with his education.

Soon after completing his MBA he came back to his home country Kenya and he landed a job at Barclays Bank( now ABSA Bank). Adan joined the bank as a Finance director .

As a result of his hard work, determination and passion he had for banking, Adan continued to rise through the ranks. Eventually, he managed to take over as the Managing Director for Barclays Bank and not only for Kenyan branch but for East and West Africa.

During his tenure BBK managed to win the Banker Award 2009. 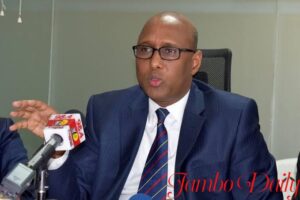 Adan was nominated to serve as cabinet secretary for the first time in 2013 by Uhuru Kenyatta. His long career experience when it comes influenced his nomination as the head of Industrialization and Trade ministry.

After his nomination he was vetted by the Kenyan parliament and then he was officially approved as the Cabinet Secretary heading Industrialization docket. After that, he took the oath of office on 15th May 2013.

Adan served in that ministry for seven years under which the ministry experienced great transformation.

Adan left the industrialization docket to Betty Maina, a very humble woman with a lot of wealth when it comes to experience. Adan will serve as the Cabinet Secretary until 2022 when President Uhuru term expires.

List of Top 10 Richest Politicians in Kenya and Their…