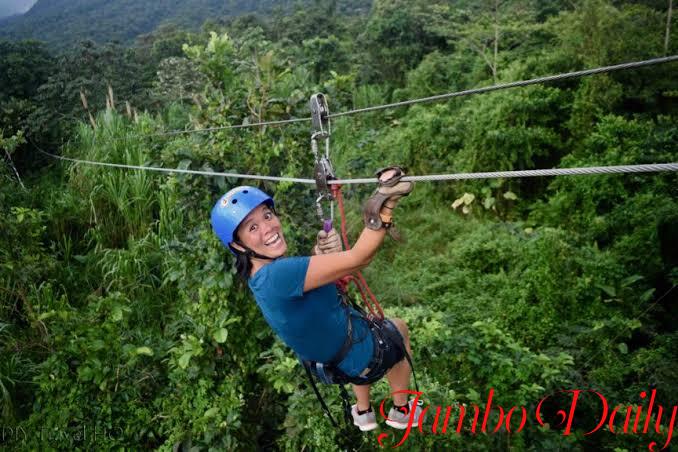 List of the Best Zip Lining Locations in Kenya

Here is the list of some of the best zip lining locations in Kenya. Kenya is known for so many tourist attraction sites and one of the things that excite both local and international tourist is zip lining which is not common in most places. Zip lining wasn’t well embraced in Kenya until some decades back and it has grown with time and now it’s one of the most valued fun activities around the country.

Zip linings are normally established in a well-V-shaped valley with a perfect aerial view of beautiful sceneries. To be sincere zip lining is somehow scary and fun, if a friend tags you better have that courage to ride on a steel cable.

However, before you take the ride the lining attendants normally double checks the belts for safety measures. With all said and done now let’s look at some of the zip lining locations in Kenya.

Kereita Forest is one of the most popular zipping spots in Kenya, it is located about 70 kilometers from Nairobi City and just a few kilometers from Kimende town. The best part is that the forest is located at the tip of the famous Aberdare Ranges which has fascinating sceneries. The venue is maintained and operated by FlyingFox and their line are of international standards meaning your safety is 100% guaranteed.

Kereita features six lines that are named differently and are of different lengths. The first line is dubbed The Colobus Catapult and it measures 425 meters long. This line moves at a speed of 60kph and it takes you to the second zip line by the name of The Flying Elephant which gives you a clear ariel view of the forest and measures 385m long. The third line is The Eagles’ Nest which is 395m long and takes you up to 150f high, above all big trees.

The fourth line is The Big Sky which is 360m long and it gives you a clear view of Mt. Kenya and it heads directly to the fifth line, The Mooooving Target which is 325m long. The last line is The Lumberjack which is 330m long.

The magnificent zip camp is located just a few kilometers from Sagana town and it features 250m long zipping line. The best thing about this zipping spot is that it cut across the Rapid falls and it’s one of the most affordable zipping lines in Kenya.

Machakos town has been ranked as one of the modern growing towns and trust me it is one of the towns that has the best fun spots and zip lining isn’t excluded in that list. Machakos People Park is categorised as one of the zipping line around Machakos and Kenya as a whole.

The place offers two zip lines one measuring 200m long and the other measuring 300m long so it’s up to you to  make a choice. As a beginner the 200m zip is more preferably.

Limuru Zip line has gained prominence since it boarders the city just 15 kilometres from Nairobi City. It is situated at The Dam Hill, the fun part is that it actually cuts across the dam.

It is also one of the most affordable zip lining places in Kenya and there is a resort around meaning there’s a perfect place to spend a night if you are coming from another county.

One for the coastal people, coastal region is well known as a swimming hub due to the Indian Ocean but that doesn’t mean they can’t zip line. Bofa Beach Resort is one the top zipping location in the coastal region.

The High Rope challenge and zip lining at the resort was launched in October 2017 and local fell in love with the activity and they have been flocking there ever since the best thing it’s affordable.