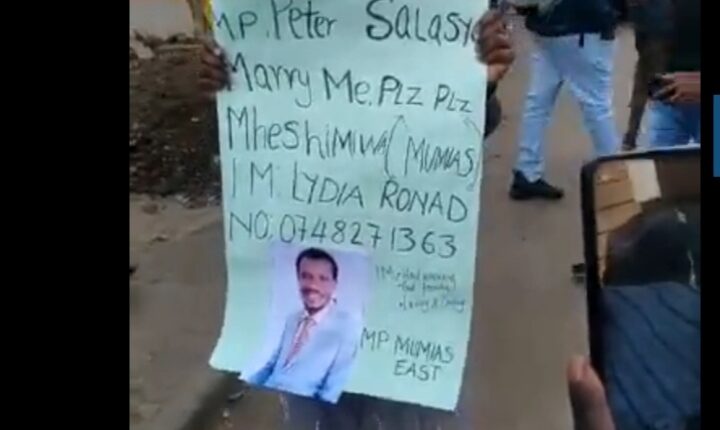 A video of a young lady asking Mumias East MP Peter Salasya to Marry her has caused a stir online. The lady, who was carrying a placard pleaded with the young mp to marry her, pledging loyalty and allegiance to him.

The lady identified as Lydia Ronad said she had noted that the young MP was looking for a wife and had decided to seize the opportunity.

She went ahead to share her phone number just in case anyone could connect her with him. She also attacked a photo of Salasya to prove her seriousness.

The onlookers her could be heard asking if she was really into the MP or if she just wanted her money. However, she claimed that she had a job ‘hustle’ and that her feelings for salasya were not fabricated.

Here is the Video as sharedTwitter by a user:

A few weeks ago, MP Peter Salasya went viral in the country after claiming that he was wifeless and needed a lady to marry. He went ahead to list down the qualifications for the aspiring suitor and noted that he was serious about it.

The Mp later responded to her, promising to get her contact and invite her over for lunch at the Parliament buildings.

Ruiru Bar Where Revelers Get Head Massage While…