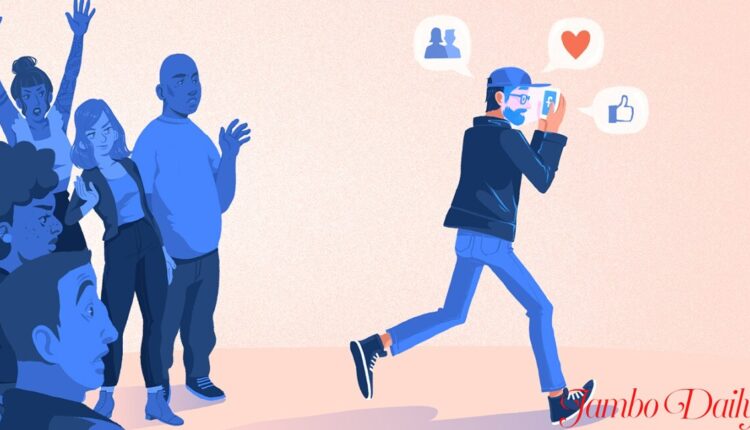 When I’m not ordering suits like Embarambamba’s, I help men get and keep women for long-term relationships.

Today’s question comes from a man who took out a potential girlfriend on a road trip but was left out of her social media photos after the trip.

The first man to understand women in 6000 years sets him straight.

I met Sally two months ago through a mutual friend. She’s 26, and I’m 31. She’s also beautiful, outgoing, fun-loving, and makes for great company.

For our third date, I took her on a road trip to Nakuru and back to Nairobi. It was an amazing experience.

We took beautiful pictures together, had a great time and she was all over me like white on rice.

Sally is a big social media user. She’s got tons of pictures of herself on Instagram and whenever she has a good time, you won’t miss a record of it on her WhatsApp status.

Personally, I only use social media to check out pretty girls and hardly post pictures of myself.

Here’s the problem though. That evening and the following two days after our road trip, I camped on all her social media platforms to see if she would post our pictures together but all I saw was just her own pictures.

There’s one photo of her sitting on top of my car’s bonnet but she covered the number plate with an emoji!

There’s absolutely no record or mention of me! I was so disappointed I didn’t like or comment on any of them.

Sally loves attention so I expected her to ask me why I didn’t like or comment on any of her pictures as I usually do but she hasn’t bothered.

Now, I think that’s something girls only do with men they’re not proud of like sponsors. Doc, how do I handle this matter? Should I be upfront and raise it up directly with her?

Honestly, I feel used. You don’t spend all that money to treat a girl and she can’t be bothered to post you on her status.

Does Sally love me or does she see me as a sponsor to be hidden like a bad habit?

Ian – who wants to be recognized

DON’T BE NEEDY WITH WOMEN

Top 10 Podcasts in Kenya and Their Hosts

Top 10 Famous Shopping Malls in Kenya and Their Locations

Top 5 Earning YouTubers in Kenya and Their Subscribers

I like the fact that Sally was all over you like white on rice. It’s the woman who should be dying to touch you, not the other way round.

To you Psychology Majors: “When a woman loves you, she can’t have enough of you.”

That’s the most important point in your email. Like my cousin, General Love of Langata Barracks says, “All the rest are sideshows, soldier!”. And like my Uncle Jethro Love asks, “Who exactly is the drama queen in your relationship, grasshopper?”

Now, let me get this straight.

You’ve dated Sally for two months and that was your third date? Who else are you dating? If you can’t meet Ms. Right once or twice a week, you have no business dating my friend.

Then you made the grave mistake of taking a girl you’d just met twice before on a 300km road trip.

What’s wrong with you Ian? Why didn’t you cut to the chase and give her an engagement ring then?

Ms. Right has got to earn her treat. You only take Ms. Right on a road trip if she’s been nice, consistent, loyal, giving, and displays a good attitude for at least one year.

You’re going too fast for your own good. Romantic love is a marathon; not a sprint but you’re here running to get dumped.

Sally did not post you on her status because it’s too soon. You need at least twelve dates with a girl before you can say you’re an item.

You’re not even halfway that street so why should she post you? It tells me her head is screwed on right. Being a heavy social media user doesn’t mean she parades everything out there!

To you Psychology majors: You’ve got more to lose posting your love interests on social media than keeping a low profile. Like my cousin Big Man “Bazuu” Love from down in Buruburu says, “At least then you don’t have to make lots of explanations when stuff hits the fan, bro!”

Anyway, the way you gauge Ms. Right’s interest level is if you set updates and she turns up consistently, not whether she posts your pictures on social media.

Sally did not use you. You’re the one who wants to use her to advertise yourself on her social media when you’ve not earned it.

Should you raise it up with her? Only if you’re comfortable making a fool of yourself.

Is Sally proud of you? Does she love you? It’s too early to call.

Keep it light and funny, don’t make a fool of yourself, and slow down.

Help! My Girlfriend Has Started Salivating Over Audis!