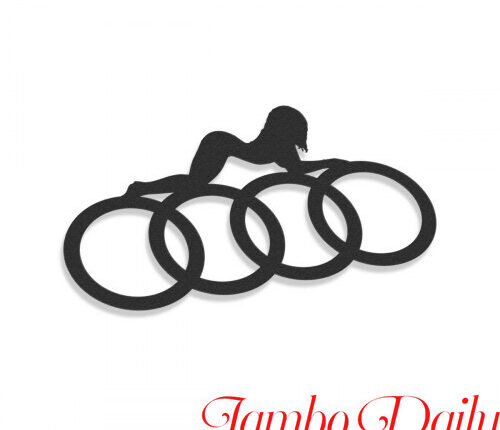 Help! My Girlfriend Has Started Salivating Over Audis!

HELP! MY GIRLFRIEND HAS STARTED SALIVATING OVER AUDIS!

When I’m not wondering why water has to boil for us to cook ugali, I help men find good girls and keep them. Today’s question comes from a guy whose girlfriend not only got a tattoo in a secret place but also knocked him for not driving a big car.

I was hoping that you could interpret some of my girlfriend’s actions. I’m 29 and she’s 23. We’ve been seeing each other for 7 months now and things have been great. I would say she likes me 90 per cent. Here’s the story: She told me she’d gone out with her friends last week and she’d pierced her nose. Then she started talking about tattoos. Apparently, the same day she got a nose ring she also got a tattoo etched on her back just above her bottom.

I’m pretty conservative on stuff like that and the tattoo made me wonder how she got it without baring her whole naked bum to the artist who’s most likely a dude. Anyway, it’s fairly attractive so I didn’t have a problem with it. She was really worried I could be angry because she knows my views on tattoos and nose rings but I didn’t make a big deal of it.

Last evening, we were riding a taxi and got caught up in a traffic jam. The vehicle in front of us was an Audi Q5 and I commented on it. Then she came right out and said, “If you had an Audi like that, I would get so turned on every time I saw you in it I couldn’t control myself.”

What the hell? Okay, she told me she likes Audis but all that did was make me feel inadequate!

Do you think she’s trying to tell me something else? Why did she get the tattoo just above her bum? Why did she punch her nose? I’m so far off buying a Vitz. How will I get an Audi Q5? What should I do?

The Top 10 Best Airbnbs in Kenya

List of 10 Interesting Things to do in Mandera County

List of 10 Interesting Things to do in Marsabit County

List of 10 Interesting Things to do in Tharaka Nithi County

You think a girl can behave this way and still love you 90 per cent? Heck! She’s got you more mixed up than a fruit smoothie!

Just because you like her a lot doesn’t mean she’s gone over you. It’s an unfortunate fact of life that many women will spend a lot of time with a guy without having any true romantic interest in him. So how do we know she doesn’t really care for you?

To you Psychology Majors: Women who like you don’t do things that confuse you.

Let’s talk about the tattoo. You say it wasn’t a big deal. But Ken, it was a big deal.

A girl with high Interest Level and a good attitude that knows you don’t like tattoos would either never have gotten it, or at least would have somehow included you in her decision to get it. If we translate your girlfriend’s Womanese into English, what she was really saying was: “I’m doing this cuz I want to, and screw you.” She proved that she has no respect for you when she took off her trousers and let another man sketch on her private parts. Now she has a permanent symbol of her disrespect for you emblazoned on her body – forever.

Next she salivates over another man’s car. Why are you with her? I hope you waited for the next pretty girl on the street and told her, “If you were as cute as her, I would get turned on every time I couldn’t control myself.” Like my cousin General Love from down at the barracks says, “You’ve got to return fire with fire, soldier!”

You sound like an opened-minded guy, but she should be dating someone else, not you. You two are like oil and water.

Wake up and look at the huge red warning flags waving in front of your face. If you want to have a successful, mutually rewarding, long-term relationship with a woman, she must have a good attitude and this dudette gets an F on her attitude report card.

Remember, guys: Ms Right must have good attitude and high interest level in you.