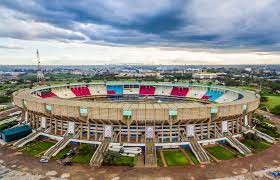 This article outlines the best football stadiums in Kenya as of 2022.

Over the last few years, Kenya has continued to gear up efforts to improve the general performance in sports and athletics among her population. Currently, Kenya has been listed as the best-performing country in Athletics across the African continent closely followed by Uganda. In the Just concluded 2020 Tokyo Olympics, Kenya emerged as number one in Africa with 4 Gold medals, 4 Silver, and 2 Bronze medals.

In Football, Kenya has always tried to catch up with other African countries and it recently played in the 2019 Africa Cup of Nations (AFCON) up to the Round of 16 levels. As part of the efforts to improve the country’s performance in football, Kenya has invested heavily in the construction of sports infrastructures such as stadiums, indoor arenas, and sports academies.

Today Kenya has over 30 stadiums spread across the country. These stadiums serve the interests of Kenyans in different sports and gaming activities, especially football. It is however prudent to admit that most of these stadiums are mainly used for football games and competitions.

The largest stadium in Kenya is the Moi International Sports Centre located in Kasarani with a sitting capacity of 60,000 followed closely by Nyayo National stadium with 30,000 sitting capacity.

Here is a list of the top ten largest stadiums in Kenya as of 2022.

The Moi International Sports Centre- Kasarani is the largest stadium in Kenya with a sitting capacity of 60,000. The stadium is located in Kasarani Estate, Nairobi along Thika Super Highway. The facility is used for both sports, athletics, and indoor games among others. Apart from the normal stadium setting, Kasarani has an indoor Arena that is useful for indoor games such as tennis, table tennis, basketball, netball among others.

Kasarani Sports Complex is the first of its kind in Kenya as it reaches the standards of international sports bodies and organizations such as FIFA for Football and IAAF for athletics. The stadium recently hosted the IAAF Under 21 world championships athletics that were held in 2021 in Nairobi.

Boasting a 30,000 sitting capacity, Nyayo stadium is the second largest in Kenya. Located in Nairobi City, the facility is useful for sports and gaming activities just like kasarani. Apart from sporting activities, Nyayo is also useful for political rallies and national holidays celebrations such a Madaraka and Jamhuri days.

Located in Kakamega county, Bukhungu stadium boasts a 30,000 sitting capacity, making it appear among the top three stadiums in the country. The new Bukhungu stadium was officially opened by Kakamega County Governor Wycliffe Oparanya on 12th December 2017  during the Jamhuri Day celebrations.

It is the home ground for Kakamega Homeboyz FC that competes in the Kenyan Premier League that consists of 20 teams from various parts of the country.

The name Nakuru comes into every Kenyan’s mind when the word Afraha Stadium is mentioned. Afraha Stadium is the fourth largest in the country, boasting a 20,000 sitting capacity. Located at the heart of Nakuru town, the facility serves various interests of Nakuru residents in sports and gaming activities.

Located in Kisumu County, Muhoroni Stadium features the fifth largest stadium in the country with a sitting capacity of 20,000. It is the home ground for Muhoroni FC that competes in the Kenyan Premier League, the largest football league in Kenya.

Seated on the outskirts of Meru town (Makutano), Kinoru Stadium boasts an 18,000 sitting capacity, making it the sixth-largest stadium in the country. It is the home ground to Tusker FC, a football team that competes in the Kenyan Premier League.

The newly upgraded Kinoru stadium is the largest of its kind in the entire Mount Kenya Region and was the venue for Madaraka Day Celebrations in 2018, a ceremony that was graced by President Uhuru Kenyatta.

Nairobi City Stadium is a multi-purpose stadium located in Nairobi City along Jogoo Road. With a sitting capacity of 15,000, the facility serves various interests of Nairobi residents in games and sporting activities, political rallies, cultural and corporate events among others.

The facility was formerly known as African Stadium, Donholm Road Stadium and Jogoo Road Stadium before its name was officially changed to City Stadium. The stadium is managed by the Nairobi City Council.

Kenyatta Stadium is the Largest Stadium in Machakos County and the whole upper eastern region. With a 10,000 sitting capacity, the facility is used for various activities in the region ranging from sports and gaming activities to political, social, and cultural events. It is managed by the Machakos County government.

Being the second-largest city in Kenya, Mombasa certainly can’t miss on the list of Stadiums. The Mombasa Stadium is located within the Mombasa Municipality area with a 10,000 sitting capacity. It is mainly used for sports and gaming activities as well as for political rallies and other significant events.

Closing the list of top ten stadiums is Kipchoge Keino Stadium, a multi-purpose stadium located in Eldoret, Uasin Gishu County in Rift Valley. With a sitting capacity of 10,000, the facility serves the residents of using Gishu County especially when it comes to athletics as many of Kenya’s renowned athletes come from the region.

It is named after Kipchoge Keino, a legend in the Kenyan athletics scene who flagged the Kenyan flag high during his time as an athlete. Kipchoge is a two-time gold-medalist in the middle and long-distance runners race worldwide. He was the Chairman of the Kenyan Olympic Committee (KOC) until 29 December 2017 when he retired at the age of 77 Years.

Kipchoge Keino Stadium is the largest of its kind in the entire rift valley region and is managed by the Uasin Gishu County Government.

Other notable stadiums in Kenya include: