However, the company was shut down by Kenya Revenue Authority on Friday 4 March for failure to comply with Tax regulations. At the time of closure, the company had ksh 322 Million tax arrears.

Tabitha joined the University of Nairobi for a bachelor’s degree in Business Administration. Upon graduation from university, she secured a job at the ministry of tourism where she worked Tas an accounts clerk for about two years. 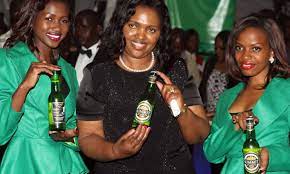 Tabitha met her husband Karanja who was operating a Hardware business in Naivasha. After some time, the couple decided to close down the hardware business and venture into the then un-flooded wine-making business.

They began by producing 200 litres of the Vienna brand. The beer was received well by the consumers and soon the demand for more alcohol grew, prompting them to introduce another four brands of drinks.

They subsequently began manufacturing Gin and Vodka under Keroche Industries company. This came just after the government had introduced high taxation on liquor. The company experienced massive growth in the year 2008, this enabled them to produce one of Kenya’s most popular drinks known as Summit. The company was able to comfortably produce over 500,000 bottles of beer in a day.

The industry was later renamed Keroche Breweries in the year 2015. As this happened, more funds were injected into the plant, increasing its production capacity to 110 Million liters of liquor per annum. The then minister of trade Adan Mohammed called for the commissioning of the plant on 31st march 2015  following its renaming.

Tabitha met her husband in Naivasha while he was working at hardware and engaged to him. The two later married and brought forth four children namely; James Karanja, Anerlisa Muigai, Edward Muigai, and Tecra Muigai.

On the 2nd April 2020, the nation woke up to sad news on the demise of Tecra Muigai- the second-born in Karanja’s family. Tecra passed on following a domestic accident that occurred at an apartment where they were living with his 54-year-old boyfriend Omar Lali. At the time of her death, she was age 29 and was looking up to celebrating her 30th birthday in a few days’ time.

“Tecra’s brilliance, passion, and energy were the source of important innovations that have enriched the company’s product range, including the development of new brands that were scheduled to be launched this year,” the statement added.

Tabitha received the Moran of order of the burning spear award from the former president Mwai Kibaki. Her brand gained more popularity both locally and globally when she was also honored with an AABLA award. Keroche Breweries beer is among the most consumed beer brands in Kenya, taking up 20% of the total consumption.

In 2022, Tabitha announced joining politics where she aims to scoop the Nakuru gubernatorial seat on a UDA ticket.

After the Commissioning of Keroche Breweries by Adan Mohammed, speculations arose that the company was manufacturing second-generation brews. The area Member of Parliament Kihagi threatened to break into the company offices and inspect for the said brews.

The company was then faced with a tax evasion scandal where the Kenya Revenue authority alleged that her company had evaded tax payment amounting to Kshs. 14 Billion. An arrest warrant was issued against her by the Kenyan director of public prosecution Noordin Haji.

Tabitha opposed the allegations, terming it as connecting with his business competitors. The matter escalated to court and the Kenya Revenue Authority won the case. Tabitha was then forced to make arrangements with the Authority on how to settle the arrears.

On 4th March 2022, KRA finally made a decision to shut down the company over Ksh 332 Million Tax arrears, rendering over 250 employees jobless. The decision arrived at even as Tabitha had asked the Authority for a grace period to pay the tax, citing that the Covid-19 pandemic has affected the company operations.

Tabitha went ahead to petition president Uhuru Kenyatta to intervene on the matter, citing that efforts to get onto the negotiation table with KRA had hit a snag.

Tabitha’s income has mostly been sourced from Keroche breweries where she held the rank of CEO. She, however, has other sources of income in her personal investments. Her estimated net worth is over Kshs. 10 Billion.