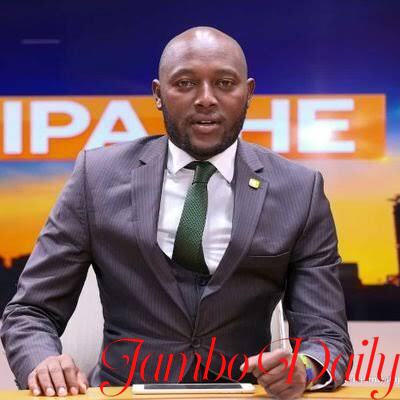 Stephen Letoo is a senior political reporter at Citizen TV, a station owned by Royal Media Services. Citizen TV is the most watched television station in Kenya and it also attracts viewers from Tanzania and Uganda.

Letoo has vast knowledge and experience in researching and reporting on political affairs. He has been  described as a strong personality since reporting political news is not an easy task. When things do t go as expected, a political reporter may end up colliding with the political elites, which may lead to dire consequences.

Stephen Letoo went to Kabianga High School for his secondary education. He later joined the University of Nairobi where he pursued a bachelor’s degree in Journalism and Mass Communication. His dream of becoming a journalist finally came true when he graduated and landed his first job at Radio Africa Group.

During his early years, he developed an unmatched love for news presenters and reporters at the National Broadcaster KBC. His father who was a chief in Narok, was one of the few people who owned a television in their locality. People used to flock their home to watch news and this motivated him to work hard and be on TV one day.

While in Kabianga High School, he launched a weekly assembly news bulletin dubbed Kabianga 100. He would research on activities taking place around the school and report accordingly. This eventually helped him sharpen his skills and increased his quest to be a journalist. He also wrote news for a campus online site.

He started his formal career at Radio Africa owned Kiss 100 and Classic 105 radio stations as a news reporter. He later secured a job at Royal Media Services’ Citizen TV as a political news reporter. After working for some time, he was promoted to a senior political reporter, a position he holds until now, and does well at it.

His work is not a walk in the park as he usually faces alot of challenges. He was recently assaulted by plain-cloth officers at the Jomo Kenyatta International Airport (JKIA) while following up on Miguna Miguna’s deportation fiasco.

During the Covid-19 outbreak in 2020, he contracted the deadly virus from an unknown place but was quickly treated and he recovered. In an exclusive interview with Kenyans.co.ke,the journalist stated that at the time he did not have any symptoms of the disease and was mesmerized upon testing positive for the virus.

Stephen Letoo is a married family man. He and his wife Winnie Nadupoi are blessed with a son, Santino Leylan Letoo. However the two broke up in 2021 and agreed to share parentage following unavoidable circumstances.

Through his hardwork and personality, he was awarded with 2019 Maa Male Personality of the Year. The award recognizes achievments of individuals among the Maa comnunity in Kenya and Tanzania. During the Raila Odinga’s Azimio La Umoja conference held at Kasarani stadium, his fans came out in big numbers to award him for keeping them updated on matters concerning politics in the country.

His networth is not currently known to the public but he earns a salary of approximately Ksh 800,000 per month.