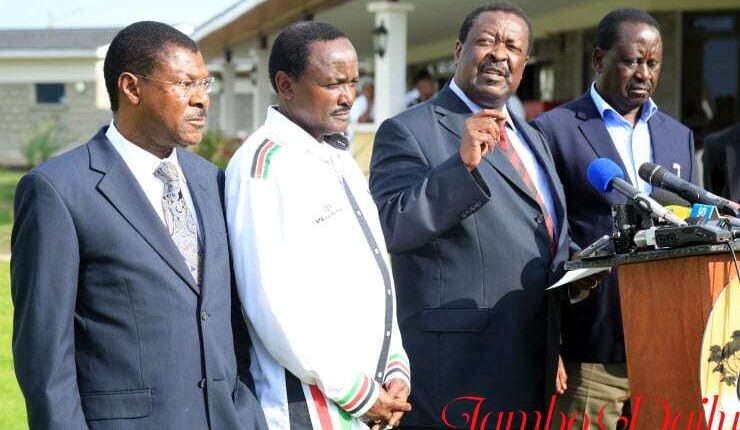 This comes just after Kalonzo’s Wiper Party and Musalia Mudavadi’s ANC left the coalition by writing a letter to the registrar of political parties.

Ford Kenya party leader senator Moses Wetangula announced the party’s exit from the NASA coalition in the midmorning hours of Saturday July 31 after a consultative meeting held by the party’s National Executive Committee (NEC) where the members agreed with the Party’s decision to exit the coalition.

Addressing Journalists at Simba House in Nairobi on Saturday 31 July, the law maker said that they had formed the One Kenya Alliance (OKA) Coalition in a bid to unite Kenyans and went ahead to invite Raila Odinga and his party to join the coalition.

“The unity of the people of Kenya is paramount to our quest for leadership. In that regard, therefore, we don’t want to lock out anybody. And the good turn that our parties did to ODM, is the same breath we are saying we have formed the One Kenya Alliance (OKA); we invite ODM and its leadership.” Said Wetangula.

Speaking at the same meeting, the party’s acting secretary general Chris Wamalwa said that despite Ford Kenya’s exit from NASA, the party is still demanding its share of party funding from ODM.

“This is our entitlement and we are telling Raila and ODM that we should walk the same path and we are also demanding for our share of the political parties’ fund,” said Wamalwa.

The NASA coalition was founded on 11 January 2017 with an aim of bringing together small and larger political parties in a bid to field a strong presidential candidate in the 2017 presidential poll.

Apparently, three affiliate parties who held a large share of the coalition’s fortunes have left, with three joining the One Kenya Alliance coalition ahead of 2022 polls.