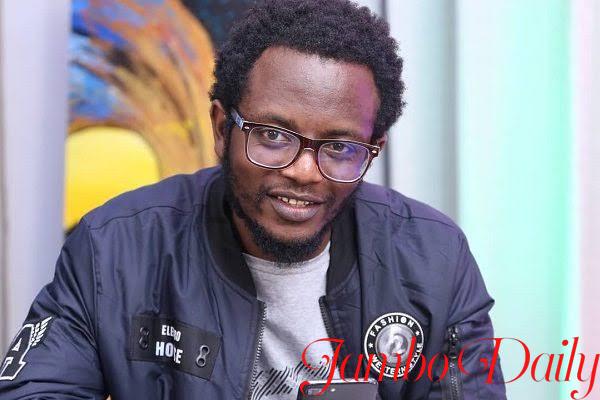 Born Herman Gakobo Kago, Professor Hamo is a Kenyan stand up comedian and a radio presenter. The comedian is a co-host at Hot 96 FM morning show alongside famous journalist Jeff Koinange. He was also a brand ambassador of Startimes Media for a period of one year.

Professor Hamo was born on 5th July 1980 in Nakuru; he is 41 years as of 2021. He is a fifth born in a family of eight. Hamo and his siblings grew up in a military base at Lanet in Nakuru as his father, James Wachira was a military officer. Hamo’s father succumbed to a heart attack resulting from old age on October 5, 2016. In a past interview, Hamo disclosed that none of his siblings were in the public domain.

Hamo later joined Kisumu National Polytechnic for his tertiary education where he enrolled for a diploma in Electrical Engineering. He would later drop out to join a band citing that the course he was pursuing was not his passion.

Hamo dropped out of college and joined a band by the name Tamasha Band where he started as a vocalist. During that time, he also joined Theatre groups and started performing set books for high school students, a move that exposed him to the comedy industry.

Despite Hamo joining the band, it was not paying him well. He started cooking mandazi and selling them in Nakuru using a bicycle. He said that the business was not that bad although it was tiring and took most of his time, a fact that prompted him to quit and focus on comedy.

Hamo finally decided to put his stake in Kenya’s largest comedy show; Churchill’s show after learning of their upcoming auditions. He, therefore, traveled to Nairobi and immersed himself on stage, only for the Judges to chase him away without a word.

Despite that, he did not give up, he continued attending the auditions until one day he got a chance to appear before an audience. Hamo as expected delivered a satisfactory performance and was subsequently absorbed into the show. That is how his breakthrough came about.

When Comedian Jalang’o faced the ax at Hot 96 FM in July 2018, Royal Media Services recruited prof Hamo as the best-fit man to replace him in the morning show. Since then, he has been hosting the show alongside Jeff Koinange; a highly paid Kenyan journalist who also anchors news at Citizen Tv. He is believed to be taking home a Six-Figure salary from the media gig.

Hamo was however fired from Hot 96 days later after his fellow comedian and baby mama Jemutai Comedian exposed him as a deadbeat dad. His position was filled by Nick Odhiambo who was formerly hosting a Rhumba show at Radio Maisha.

In 2015, Hamo landed a lucrative ambassadorial deal with Startimes pay Tv just months after popping up on the comedy industry. In the deal, Hamo was set to appear on Billboards, TV Advertisements, and Roadshows advertising for Startimes products. The advertising deal earned him a whooping Ksh 10 Million as pay for his services.

Professor Hamo’s Networth is not in the public domain but if his job and deals he usually lands are anything to go by, he is a fairly wealthy man. Information about his net worth will be updated as soon as reliable information is sourced.

In a recent interview, Professor Hamo revealed that he is married to his beautiful wife and together they are blessed with two children. Hamo resides in Nairobi with his family. However, Hamo’s wife and children’s names and other details remain at large.

The self-proclaimed professor has never posted his wife, neither his children on social media but netizens came to know him after Hamo’s scandal with Jemutai Comedian.

Towards the end of April 2021, Jemutai Comedian, Hamo’s fellow comedian at Churchill’s show came out to reveal his 3-year relationship with Hamo, which led to the birth of their two children, who Hamo had allegedly neglected.

Jemutai, through controversial blogger and Tea Master Edgar Obare, exposed Prof Hamo as a dead-beat dad who did not take care of his children; Jeremy and Kaylee despite being financially stable. Jemutai narrated how Hamo had impregnated her with two children and later on fled, leaving all responsibilities on her. It is now clear that Hamo has sired two children out of wedlock.

Prior to the expose, Jemutai had earlier been questioned about dating Professor Hamo, but she refuted the claims saying she was dating another man who was not in the showbiz. He however admitted that Hamo was her friend and was helping him out with comedy work.

On Sunday 2 May, professor Hamo came out to clear the air, in a long Facebook post, Hamo told his fans that he was a married man with children both in and out of wedlock.

He however denounced Jemutai’s claims of neglecting his children, saying that he has always taken care of his kids, adding that he regularly sends their upkeep money to their mother through his wife identified as mama Mellisa.

It was not clear who is telling the correct story but only time will tell. Apparently, Jemutai had resulted to asking for financial support from her fans citing that her kids had nothing to eat.

The mother of two had resulted to selling her Facebook page to get money to feed her kids, but her fans strongly discouraged him from taking such an uninformed move.