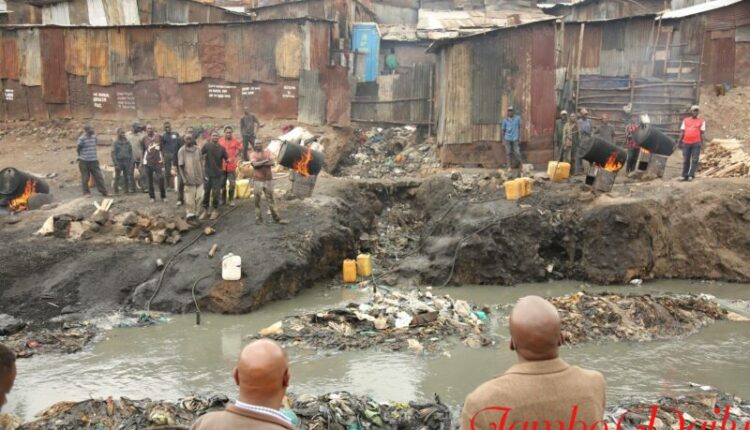 Most Dangerous Estates In Nairobi, Number 3 Will Shock You.

While living in Nairobi, there are certain estates you should avoid like a plague. These estates are so dangerous that you may lose your valuable property in broad daylight, or worse even your life. It is widely known that some estates in Nairobi are unpassable especially during the night, you will be stripped of everything you have on you, even your inner wears, you will be lucky if you escape unhurt.

Here are the most dangerous estates in Nairobi.

For decades, the Kariobangi estate has hit the headlines for all sorts of crime and violence perpetrated on innocent Nairobi residents by notorious criminals. The area is full of criminal gangs and robbers that terrorize the residents even in broad daylight. The thugs are arrested daily but each day more keep trooping in.

Dandora, especially Phase 2 is another dangerous estate in Nairobi where most of the City’s garbage is trashed. The dumping site is a camp for street children and thugs masquerading as street children as well. Once you are spotted as a newbie in this area, you become a soft target for the thugs as they will corner you and order you to render any valuable belonging you have on you. It is only wise to give as if you try to resist, you might have a dagger pushed into your stomach instantly. Ironically, none of the passers-by will make a step to rescue you, it is ‘every man for himself in this estate.

Kayole is a dangerous City estate also known as ‘Oyole’. The area is full of criminal gangs who demand protection fees from residents and business owners in the region. In case you fail to pay the protection fees, you will learn the hard way. It is however ironic as one may ask what are they getting protected from, nevertheless residents pay for ‘protection’. Apart from that, there are other criminal activities ongoing in this area such as carjacking, robbery with violence, and pickpocketing. For decades, Kayole has remained one of the most dangerous places that one would ever think of in Nairobi.

Mathare North is just a walking distance to and from Nairobi CBD. It is a hotspot for crime and violence full of gangs that terrorize Nairobians even in broad daylight. Every day, you won’t miss a case of someone getting robbed of her handbag, mobile phone, or even money. Houses in Mathare are so cheap, going for ksh up to ksh 1000 per month, which is so affordable for the gang members. This causes thugs to flock to the area as life is so affordable for them and their target population is high and vulnerable.

Mukuru slums form one of the most dangerous estates in Nairobi. The thugs in this area are so notorious that they will strip you of all your valuable items, including your inner wears. This is an area where people who have lost hope in life live in abject poverty. If you happen to visit this area, make sure you are dressed like a thug or a normal hustler. You are not allowed to own expensive items like a television and computer in this area as you will be robbed as soon as you land them in your house. In case you dress smartly, you will become a target for the gangs who will assume you are rich and attack you mercilessly. In fact, the word ‘mercy’ to them is a word that should be removed from the dictionary as it doesn’t exist among them.

Read Safest and Affordable Estates To Live In Nairobi Kenya.

Mukuru Kayaba is a slum located in Nairobi South B estate. The area is known for all notorious crimes perpetrated by numerous gangs in the estate. While in Mukuru Kayaba, you are not supposed to dress neatly as the thugs will assume you have money and make a move to rob you. Since the slum is densely populated and congested, it is possible for gangs to rob you in broad daylight and the residents will do nothing to save you. After all, if they don’t know you, why should they help you?

KM is a small market located behind Kenyatta University. The area is known to be one of the most dangerous estates located near learning institutions. Thugs and criminal gangs are numerous especially during the night when students get robbed of their valuables and get harmed in the process. Some students have even lost their lives at the hands of these criminals who never cease to terrorize innocent children.

It is rare to find anyone walking in the streets of KM past 10. Pm as it is extremely dangerous unless you have ‘immunity. For years, Kenyatta University has warned its students against walking at KM during the night to avoid getting attacked by thugs. The university has also partnered with the police department and private security firms to ensure students are safe whenever living in the estate. Nevertheless, the thugs can only be reduced but not eliminated and therefore full security cannot be guaranteed.

For many years, the Githurai estate has been trending for all the wrong reasons not only in Nairobi but also in the rest of the country. The estate is divided into two parts, Githurai 44 and 45. Out of these, Gitjurai 44 is known to be the most dangerous packed with notorious gangs and numerous criminal activities.

When you receive a call while in Githurai, it is advisable to ignore it as if you receive it, you might lose both your phone and the money in your pocket. Walking at night in 44 estates is like inserting your finger into a beehive, and you won’t like it. The thugs hide in strategic locations awaiting the prey, and once you show up they pounce on you like an angry lion. Some of the most notorious spots famous for theft and grievous bodily harm in Githurai include the Githurai Bridge, Dragon, and Maziwa sub-estates.

Contrary to what you may experience in other dangerous estates, young teenage boys are the ones who will rob you once you land in Huruma Estate. The young boys will strip you of any valuable goods you have and top it up with a stab on your stomach or any other reachable part of the body. This is to make sure they leave a mark to remind you that you came across the baddest boys in town. Ironically, these teenagers don’t know the meaning of the word mercy despite their estate being named Huruma, the Swahili version of the word mercy. They will kill you if you resist their advances.

There was a time that Majengo was such a dangerous place that the name went viral all over the country. Since the old days, Majengo is known for all types of criminal activities including robbery with violence, carjacking, murder, and pickpocketing. The crime in this region was so high that other dangerous estates in other towns were named Majengo. For instance, if you go to Meru Town, there is an area called majengo with numerous criminal activities and criminal gangs, the same case with Nyeri town.

One funny characteristic about Majengo criminals is that they don’t allow thugs from other estates to invade Majengo. They want to safeguard the estate so that they dominate the crime scene, robbing both locals and visitors roaming the streets of Majengo in odd hours.