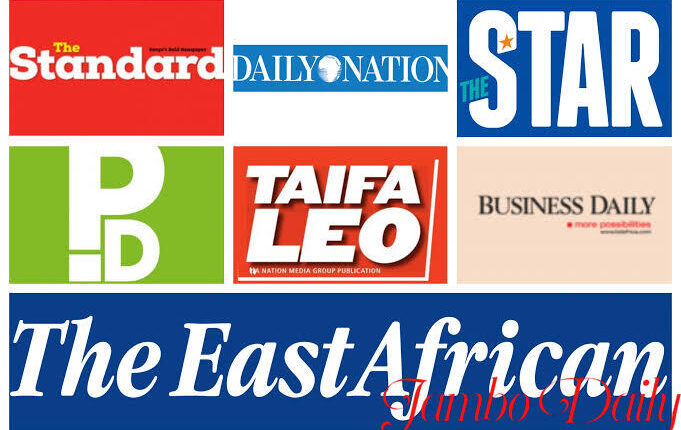 Newspapers are important tools of mass communication as they help pass information to a large audience within a short time.

Long way before the invention of radios, televisions and other means of communication, newspapers were the most widely used source of information and news sharing. A newspaper was considered a fundamental news item in society, and anyone who could afford to buy it was considered one of the few elites by then.

In Kenya today, newspapers have become common such that one would randomly joke that ‘Gazeti ni ya kufunga nyama’ without much tension. Currently, there are over 7 brands of national newspapers from main media houses circulating in the country on daily basis.

Although other sources of information such as radio and television broadcasting along with online news websites have increased competition on newspapers consumption, there is still a promising market for newspapers from potential buyers such as schools, hotels, corporate firms. The aged men are also a potential market as they like perusing newspapers to get a hang of what’s up in the modern world.

The oldest newspaper in Kenya is The Standard, which is owned and managed by the Standard Group Plc. Apart from the paper, the media giant also owns a series of other media platforms such as radio stations, television stations and digital media outlets.

Here is a list of Newspapers in Kenya and their managers.

The Daily Nation is arguably the most consumed newspaper in the country commanding a tune of over 170,000 readers daily.

The newspaper was launched in 1958 by Nation Media Group as part of the company’s plans to increase their stake in media industry as well as their revenue streams. Currently, the company produces three types of the daily paper: Daily Nation, Saturday Nation and Sunday Nation.

For decades, the daily nation has dominated the newspaper segment in print media and continues to take the lead in both sales and readership. This played a key role in keeping the media giant firm on its ground as other media firms layed off staff due to loss of revenue in the wake of Covid 19 pandemic in 2020.

Managed by the Standard Group Plc, the Standard newspaper is the oldest in the country. It was founded by Alibhai Jevanjee in 1902 as the African Standard before it changed its name to The Standard.

The Standard Group circulates at least 74000 copies of the paper daily, taking up 48% of the market share.

The East African focuses on delivering news from the East African Region in politics, business, entertainment and Agriculture. It is owned and managed by the Nation Media Group that also manages daily nation and owns NTV and Nation Fm. The paper receives readers from Kenya, Uganda, Tanzania and Rwanda.

The Star is owned and managed by Radio Africa Group, a leading media organization in Kenya but with following from entire East African Region. It is considered as the most independent newspaper in Kenya that can publish critical stories that other media houses fear to publish.

The people daily is a free circulation newspaper owned and managed by Mediamax Network Ltd. The company circulates more than 100000 copies of the paper daily, hence it is considered one of the most read newspapers countrywide.

Apart from the newspaper, the company owns K24 TV, Kameme TV and a load of radio stations. The radio stations include Milele Fm, Meru Fm and Kameme Fm among others.

The Nairobian is an entertainment newspaper they is owned and managed by The Standard Group. Though it is produced twice per week, it is a favorite paper for many city dwellers and the young people who enjoy reading captivating stories from skilled writers and journalists of Kenyan land.

Business Daily is a business news paper that is owned and managed by Nation Media Group. The paper focuses mainly on business and related news across Kenya and East Africa and is known to be one of the best business newspapers in Africa.

Owned and managed by the Nation Media Group, this is the only Swahili magazine that is widely known in the country and has remained relevant for decades.

All its stories are written in Kiswahili and specifically designed to fulfill the needs of people who cannot understand English. It also includes an entertainment and mind boggling section known as ‘dondoo za hapa na pale’ as well a a sports segment for those interested in sporting activities.

Owned and managed by the Nation Media Group, Mwanaspoti is the first comprehensive swahili newspaper to be launched in Kenya. It attracts readers from all over the country especially those interested in sporting and gaming activities and news.

Mwanaspoti covers both local and international news pertaining sports, athletics and any other information related to sports.

The Citizen is a weekly Newspaper operating in Kenya and commanding a small section of readers. Much is not known about this newspaper as it is still upcoming.

The paper is released on a weekly basis and just like the Star, it is known to publish odd stories that other media houses don’t have the guts to air. The citizen newspaper is published in Nairobi by Headline Publishers and it focuses on politics and government as it’s key areas.

As you can see, the Nation Media Group appears to dominate the print media industry followed closely by Standard Group. In overall distribution of newspapers, Daily Nation takes the lead followed by The Standard and The Star. Mwanaspoti is the leading sports newspaper in the country.