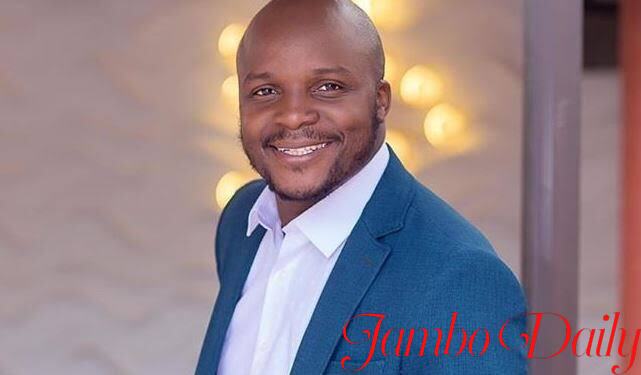 He first appeared in the limelight when he was featuring in ‘Papa Shirandula’, a swahili TV program that aired on Citizen TV with his character as Jalang’o. He currently works at Radio Africas Kiss FM on breakfast show but has shown interest in joining politics in 2022 where he is eyeing for langata MP position.

Jalango Age and Place of Birth.

He hails from the lakeside region of Kenya that is inhabited by the Luo community.

Jalang’o has 2 brothers and 3 sisters. His father died when he was still young and trying to find his way in life. He however has a mother who he takes care of along with his siblings.

Felix went to Homabay Lake Primary school where he completed his primary education and secured a slot at Maseno School. He however could not join the Maseno school due to financial constraints back at home. He then joined a local secondary school where he worked hard and scored a mean grade of C+, despite the many challenges he was experiencing.

After completing his high school education, Jalang’o wanted to join college and pursue a course of his choice. However, he could not join as his father could not raise the school fees. Disappointed by the situation, Jalang’o left home and sought a job at the lake side as a fish monger. He soon realized that the job was paying peanuts and could hardly sustain his life. It is the that Heavy J decided to try his luck in the City, he quit his job as a fish monger and left home for Nairobi to pursue greener pastures.

Upon landing in the city, Jalang’o took various jobs before he secured an acting contract at Papa Shirandula and later got a job as a radio presenter. In line with his dreams, Jalang’o went back to school to pursue his degree course. In 2020, he graduated with a bachelor’s degree in Community Development from Daystar University.

Jalang’o developed an interest in acting back in high school. When he landed in the city, he tried several acting firms including those acting set books. He undertook several auditions before he was finally selected to join Papa Shirandula and was assigned a role in the play. He performed well in his acting gig which made him a household name among many Kenyans.

After a successful acting career, jalango decided to put his stake in Radio industry. His first appearance on a radio station was back in 2004 when he was assigned a role at Kiss FM as a radio host. He later moved to Radio Maisha in 2012 where he was assigned the morning breakfast show alongside Alex Mwakideu. The two would later move to Milele FM for milele breakfast.

In 2020, Jalang’o left Milele FM and joined Kiss FM again this time hosting the morning show alongside renowned presenter Kamene Goro. He still works for Kiss FM and has announced that the gig at Kiss FM is his exit plan to joining national politics.

In October 2019, Jalango walked down the aisle with his beautiful Taita wife Amina Chao. The two have been moving on well with Jalang’o occasionally sharing photos of them enjoying life together at several lavish places.

Jalang’o has sired 2 children with his wife although he likes keeping their life away from the public domain. He also has a child with his ex-lover Chekoiyot Boiyo who is his baby mama.

Owing to his successful acting and radio career, Jalang’o is considered one of the richest comedians in Kenya. He is also a brand ambassador for big companies that pay him handsomely. In addition to that, he owns an event organizing company called Arena Media that organizes events for big firms like Safaricom. His estimated net worth is about 100 Million.

In 2021, controversial blogger and Tea Master Edgar Obare exposed Jalang’o as a Wash Wash cartel and a womanizer. He linked Jalango to a mischievous Whatsapp group dubbed the ‘Boys Club’ whose members were accused of luring women and getting intimate with them at a posh mansion located in Kilimani.

Jalang’o was listed as the leader of the group and was accused of using his massive wealth and fame to misuse women sexually. He is also said to be well endowed in his manhood, which is believed to be the origin of the name ‘Heavy J’, his nickname.

The Comedian has a huge base of followers on his social media pages. On facebook, he boasts of 1.1 Million followers.