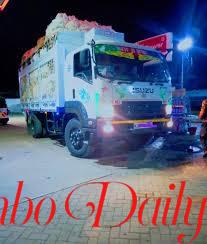 Khat or Miraa is a type of drug found in form of leaves and stems that contain stimulants known as cathinone and Cathine. The plant is mainly planted in Meru, Eastern Kenya in areas known as Igembe and Tigania.

When chewed, the plant has an effect in that it brings about insomnia, a condition where one lacks sleep due to alteration of the normal body functioning by the elements found in the plant.

For Many years, concern has been raised over how vehicles ferrying Miraa are driven on Kenyan roads. In particular, the speed at which the cars are driven attracts a lot of attention from the public.

Meru drivers associated with transportation of Miraa have always been on the spot for driving at very high speeds and posing a risk to road safety in the country. Most of the vehicles involved in the business do not adhere to the National Transport and Safety Authority (NTSA) regulations in regard to road usage.

However, there is an underlying reason as to why the drivers operate swiftly. One, the goods ferried are extremely perishable and require delivery to the destination within the shortest time possible. Failure to would result in huge losses to the farmers.

Also, the Khat business is an engagement that requires much attention, commitment, and speedy action. Most of the merchants who purchase Miraa rely on foreign markets, as such, there is always a need to keep time so that goods are delivered on time.

As a result, most of the produce is transported at night to avoid the busy traffic witnessed during the day, and also to deliver the products during the morning hours, especially at the Mombasa market.

The products are then offloaded, inspected, and packaged into the compartments ready for transportation to foreign markets after the recording of logistics. Indeed, this is a process that requires speedy action. Now you know!