Francis Gashuri is an experienced Kenyan journalist currently working at Citizen TV as a senior reporter.

He is one of the top journalists in Kenya reporting great content on the country’s top media houses. He also joins hands with his fellow journalist Stephen Letoo in reporting on political affairs on Kenya’s most watched television, Citizen TV.

Gachuri was initially working as a normal reporter before he was promoted to a senior reporter at Citizen TV in 2018. This came as reward for his selfless service and relentless efforts in delivering untold stories to the masses.

Following his promotion, his salary also increased significantly, making him appear among the highest-paid journalists in the country.

A popular news show dubbed ‘News Gang’ at Citizen TV features Francis Gachuri along with other journalists like Jamila Mohammed, Linus Kaikai, and Yvonne Okwara and airs from 10 pm.

He attended local primary school in his backyard then proceeded to a mixed secondary school. It is at there that he met with his wife and sparked a relationship that would later lead to marriage. Gashuri holds a university bachelors degree in mass communication.

Francis is a married family man. He and his wife are blessed with three kids; Sandra, Curtis and Marcus.

He met his wife in a mixed secondary school which he was studying. Although they didn’t date while in school, they ended up get married from their long-term relationship. Both Gachuri and his wife were school prefects, joined school the same day, and completed school the same year. 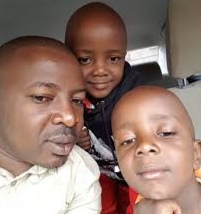 They started dating when Gachuri completed his campus education. After dating for 2 years from 2006 to 2008, they decided to tie the knot and Gashuri finally bid goodbye to the bachelor’s club. Their wedding was held on 14th February 2009 during valentine’s day.

Basing on his great role at Citizen TV, Gachuri is a man with heavy pockets. His exact net worth is not currently known but this information will be updated soon.